The minimum wage in Ireland is expected to increase by 30c to €9.55 per hour on January 1st, 2018. An Taoiseach Leo Varadkar, Tánaiste Frances Fitzgerald and Minister of State for Disability Issues Finian McGrath made the announcement of the 3.2% increase recently, which is based on the recommendations of the LPC (Low Pay Commission). The LPC’s recommendation only specifies an increase for “an experienced adult worker”. Continue reading for details on the variations of the current national minimum wage, the LPC’s specific recommendations and an overview of the factors that they considered when making their recommendations. 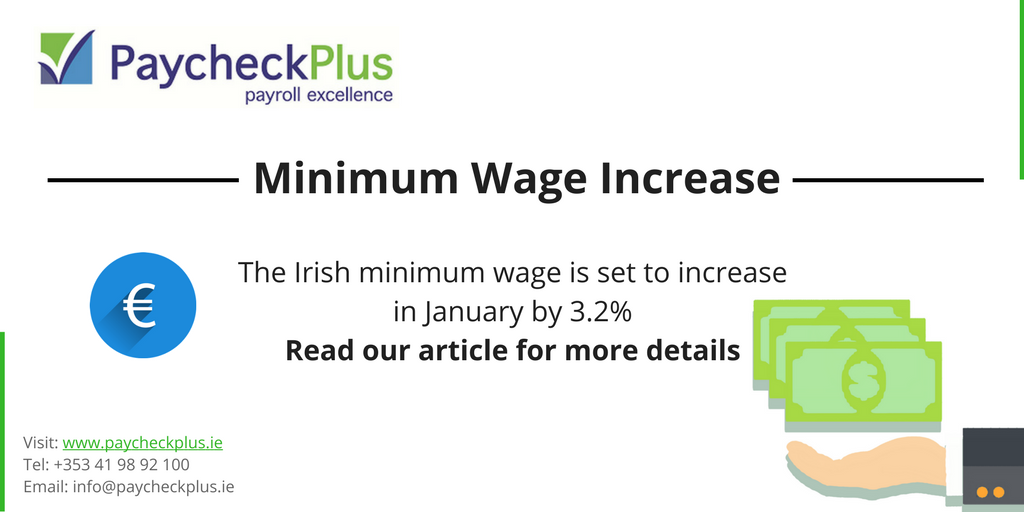 When making their recommendation for the minimum wage increase, the Low Pay Commission had regard to “the matters which the Minimum Wage (Low Pay Commission) Act 2015 sets down for consideration” and they also specifically noted that they took into account the following:

Recommendations of the LPC

In light of the above, the LPC made the following recommendations for the national minimum wage:

2. As previously recommended remove the anomaly created by the sudden increase in the rate of employers’ PRSI from 8.5% to 10.75% on weekly earnings of €376...

3. Provision should be made for the display of basic entitlements in all places of employment where the minimum wage is in operation… This will create and foster a culture of compliance with regard to the NMW, and improve awareness of minimum wage, and employment rights entitlements more generally.

Recommendation 1 is supported by six of the nine Commission members.

Recommendations 2 and 3 are supported by nine members of the Commission, although there is not a consensus regarding the extent of the entitlements to be displayed, with some members favouring a ‘single sheet poster’ approach.

Payroll compliance requirements change regularly and it’s imperative that HR, payroll teams, accountant’s etc. keep up with these changes otherwise significant penalties can be incurred. Payroll mistakes, or calculations based on outdated information, can be costly for companies and ensuring payroll compliance can be difficult for businesses and staff that don’t have payroll as a core focus.

However, here at Paycheck Plus, we keep up to date with the most recent legislation developments so you don’t have to. Our payroll specialists can ensure that your payroll is compliant with the continuous regulation advancements. We provide managed payroll, auditing, consultancy and many other services that ensure payroll compliance. We also provide a cover service for payroll staff which gives companies (and payroll staff) peace of mind that their employees will still get paid on time every time, even if their payroll team becomes ill or goes on leave.

For more information on any of our services request a callback from our payroll specialists today, call our head office on 041-9892100 or request a quote here.